FIREFOX OS: RENAISSANCE OF MOBILE APP TECHNOLOGY (FORMAT) - a Firefox OS Hackathon event organized by Instruo'13 (annual techno-management fest of Bengal Engineering and Science University, Shibpur) and Mozilla India Community on 22nd March - 23rd March, 2013 at the university premises. The main objective of the event was to gather developers around Kolkata and encourage them to build apps on Firefox OS.

We started planning the event at the mid of February, 2013 when me and Gaurab went to Pune during to take part in gnuNify'13. After success of MozTI@BESU we wanted to host a really big event. At the very first, the event that came to our mind - Firefox OS App Days. We took part in Firefox OS hackathon at gnuNify'13 and stood second. Vineel, Soumya, Sayak heard our plan and gave us the signal to go ahead.

Yes, to host any successful event you have to face a lot of trouble. We were no exception. The main reason for all the problems we faced - there is no Mozilla Representatives in Kolkata. During MozTI@BESU, Sayak was with us. But this time we were all alone. But Vineel, Soumya and Sayak were in touch with us through email. We discussed budget and other essential stuffs there. The main problem we faced was the budget.

After a long discussion with Sayak and Soumya, we ordered to make t-shirts (Firefox OS App Days t-shirt). But here the main catch was budget. Thanks to Shahid, he managed all the money, otherwise it would have been very difficult for us to manage the money.

At last 21st March, 2013 came - one day before the event. The first guest to arrive was Avinash. He reached Dumdum Airport at 5 p.m. Avik and me rushed to airport at 4p.m. We received Avinash, on the way to BESU we visited the t-shirt maker's place and gave hime the rest of the money. We reached BESU after 2 hours - quite a hectic journey for Avinash and we are sorry for that. In the mean time Biraj - Mozilla Representatives from Durgapur reached BESU. Gaurab received and accompanied him. That night we again went to airport to receive Vineel and Robin (from Bangladesh). We reached BESU after one hour journey. That night after dinner we went for a walk at the university premises. And Vineel, Robin, Avinash and Biraj liked that walk I guess!!

The next day - 22nd March, me and Bibaswan went to airport to receive Soumya da. During our return journey, we collected the stickers - FORMAT stickers. We reached BESU around 1.30 pm. In the mean time event started. Vineel gave the keynote speech and the event started. We did not expect so much participation and enthusiasm from the participants. Over 200+ on-spot registrations. Yes, everyone was surprised. After that me and Bibaswan again went to t-shirt maker's shop. 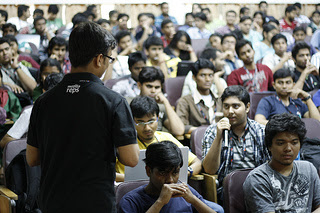 Yes!! So many participants

Around 6 p.m, I came back to BESU and took part in a beautiful Ganer Adda (song party) at B.Garden Gongar Ghat. Robin gave us some beautiful performance and sometimes we joined him. Me and Sayak were actually not singing, but perhaps shouting. But on the whole it was a beautiful party.

Next day, on 23rd March, hackathon started at 10a.m. Participants were enthusiastic. At the end we got 30 apps and some of them were really cool (like Facebook hack app by Wasim Gazi). The day went successfully. Around 6p.m, the participants finished demonstrating their apps. Then the funniest part came. We started distributing swags. People as well as we were getting confused about the size of the t-shirt. At last we finished distributing the t-shirt and other swags. 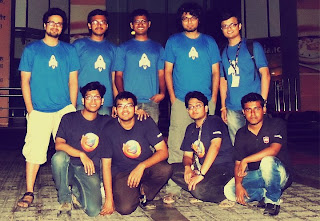 During MozTI@BESU, we had 182 participants. This time 200+ participation. Surely the participation has been increased. We did not expect so many apps single day. Thanks to Vineel, Sayak, Soumya, Robin, Avinash and Biraj for coming. I guess you had a great time at BESU. Avik, Gaurab and I, are all thankful to you because of your support without which the event would not have been possible.

At last I am grateful to team Instruo for their support and encouragement especially to Ajay, Anand, Avinash, Sourav, Nabarun. Thanks everyone. Thank you very much...